The second leg of the Melvins North American Tour 2010 is about to begin, check below for the tour dates... and yes, Canaduh they're visiting you so quit yer complainin'. Since there are only 100 of the "Hurray For Me - Fuk You"/"Paraquat Plus" 12" that's being sold at the AmRep bash in Minneapolis and your odds are slim to none of getting your grimy paws on one, AmRep has once again done the right thing and released a cheap comp cd of all the vinyl being released at the show, buy it from their store.

ScionAV remix series put “Electric Flower” a track from The Bride Screamed Murder "in the hands of some of the most exciting producers working in house and dubstep today". The Melvins are also guest hosts on ScionAV's web radio, you can check that out here.

Dale and Buzz did an interview with The Stool Pigeon

More Melvins shows being scheduled for later this summer

Dates are being announced for more Melvins shows later on this summer, keep checking the tour dates page for updates. Melvins will also be playing another special show at Grumpy's in Minneapolis, MN celebrating the 25th anniversary of Amphetamine Reptile Records. Numerous special releases are being planned for this event including a one-sided Melvins 12". The Poster and T-shirt for the event are already for sale online. Watch the AmRep Message Board for more info on the event. 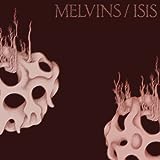 The new Melvins/Isis split 12" will be in quality record stores on July 13th, call your local shop to make sure they'll be getting copies or pre-order from Amazon.com.

NPR is streaming the audio of the entire Melvins set from Bonnaroo on June 12th.

Southern Shelter archived the audio from the Melvins show in Athens, GA on June 14th.

Pandora posted a video interview with Buzz and Coady.

Interviews with Buzz & Dale have been posted by Blabbermouth.net & Blow the Scene

The Vader Project features a one of a kind Melvins customized Darth Vader mask and the entire collection is on display now at Freeman's auction house in Philadelphia, PA and will be auctioned off on Saturday, July 10th. Visit thevaderproject.com to order the project catalog and view the press release.

The Bride Screamed Murder out today!

With a title like that, you know the record has to be a stone groove. The Bride Screamed Murder was recorded in a couple of weeks somewhere in Los Angeles...I've been told the recording studio they used was within walking distance of a Starbucks. Where isn't? This marks the third recording in a row with the same band lineup, which is almost a new record without booting a band member! What gives?

The Melvins have been around for like 25 or 26 years and they've seen some heavy shit come down...And some of it was even music. They did five albums on indie labels before they got signed to Atlantic Records in 1993...I know it sounds like a crock but it's the truth. For once something in a Melvins bio is the truth. And AND..Atlantic actually released three Melvins records before dumping them. I guess that once the top brass at Atlantic finally got around to listening to what the albums they were paying for sounded like, they gave them the old heave ho!

Oh well...In almost no time at all it was on to greener pastures in the form of Ipecac Records where the Melvins have been putting out albums ever since. How many albums have they done on Ipecac? A shit load.

But, what do the Melvins sound like? They've been described as sounding like an explosion in a machine shop, a drum set falling down stairs, a wolverine and a trout in a blender, ice cream and pickles, talentless geeks and a several other flattering epithets. King Buzzo describes the Melvins music as "Captain Beefheart playing heavy metal." I guess that's a pretty good description.

The Melvins have also been through a shit load of band members, remarkably they still include founding member King Buzzo and almost founding member Dale Crover and they still have the Big Business guys Mr. Warren and Mr. Willis playing with them.

Here's what the boys think of their new album The Bride Screamed Murder.

King Buzzo says: "I like the record. And, for once, we didn't fuck it up. I mean it's fucked up and everything but we didn't 'fuck' it up...If you follow me."

Dale Crover: "It's good! They pretty much just woke me up to play drums or sing. I slept through the hard part of the mixing while lying on the couch with head phones on."

Mr. Warren: "I really dig my bass sound on this. It has a sort of 'up' quality I've always been looking for but never was able to achieve until now."

Mr. Willis: "I think the general public will really get this one for once. Dale said I was playing my drums like a king shit hillbilly hotshot...I guess that was a compliment."

The Aquarian Weekly interview with Dale about the new album and other things.

Exclaim.ca interview with Buzz regarding 'The Bride Screamed Murder'.

Melvins Box Set coming out in time for Summer Tour

The long awaited, limited edition Melvin's box set is about to be released, just in time for their upcoming US tour. It has been in the works for over three years and now it will FINALLY be available to the public.

This box set is a limited edition of 300. It has been letterpress printed on an antique press from the 1890s. The press is powered by a treadle and fed by hand. Each individual CD package has gone through the press from four to eight times.

The box sets will be available at the shows and also online.

Melvins/Isis split 12" should be out in time for U.S. Tour

Aaron Turner of ISIS posted the layout art for the upcoming split 12" that will be out on Hydra Head Records this summer, hopefully in time for the tour dates they'll be doing together. The Melvins side will include alternate versions of 'Pig House' & 'I'll Finish You Off' - two songs on the next full length 'The Bride Screamed Murder' which is set to be released June 1st on Ipecac.

Newbury Comics has The Bride Screamed Murder available for pre-order and it comes with a bonus signed CD Booklet.

Metalsucks.net has posted an interview with Buzz where he talks about the new album, black metal nerds, and other topics. Part 1 & Part 2

The Jerusalem University radio station 106fm Jerusalem did a series of specials dedicated to the Melvins when they visited back in April of 2007 and all of the podcasts for the shows have been archived. Check them out!

Special #2 - only covers by the Melvins

The next Melvins full-length, entitled "The Bride Screamed Murder" is set to be released via Ipecac on June 1st. North American tourdates have been announced and they've also released the cover art and tracklisting.

Aside from the festival dates Melvins will be playing 2 sets on this tour. Totimoshi will be opening on all dates (other than Bonnaroo) and Isis will also be on the bill from 6/14 - 6/23:

Hydra Head will also be putting out a split 7" with the Melvins and Isis to coincide with the upcoming dates they're doing in June.

melvins.com posted a bonus remix by Hiro Noodles which you can download here. Speaking of melvins.com, they're also using twitter now(sparingly).

Members of the forum have collaborated to create a Melvins tribute album which can be downloaded here.

The Austrian magazine Rokko’s Adventures put out a special issue, 92 pages dedicated only to the Melvins, including exclusive photos. Despite the website being in German the magazine is in English and was a big hit with the members of the forum, read the thread here. Read more for further details...